I saw a kingfisher – my first kingfisher sighting. I also saw a nighthawk. I pointed these things out to city-boy, Jud. (Actually, our paddles usually sound something like this, “Eddie, look over there, it’s a blue heron – no over there by the fallen tree – more to the left – never mind it’s gone.”)

Thank you, Judson for a beautiful and fun start to the day!

When I got home from paddling, I spent some time with my hens. I let the girls roam about the yard while I raked out the chicken run. I turned over my compost heap, taking frequent breaks to chase the hens out of my neighbor’s yard. My wife came out and accused me of working on my birthday. But when you are a pretend farmer, herding chickens and shoveling compost are the pinnacle of fun. 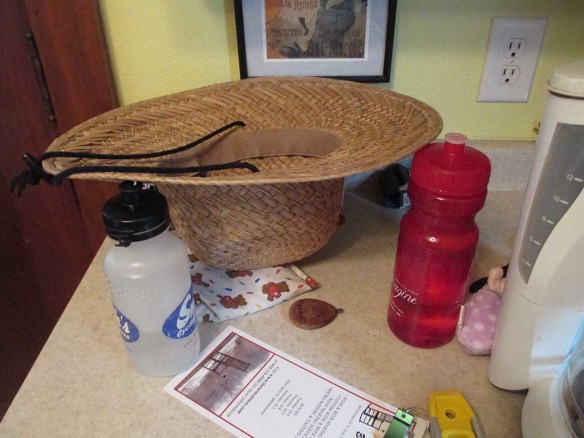 When it is your birthday, you can leave your genuine farmer hat on the counter and your wife does not yell at you. 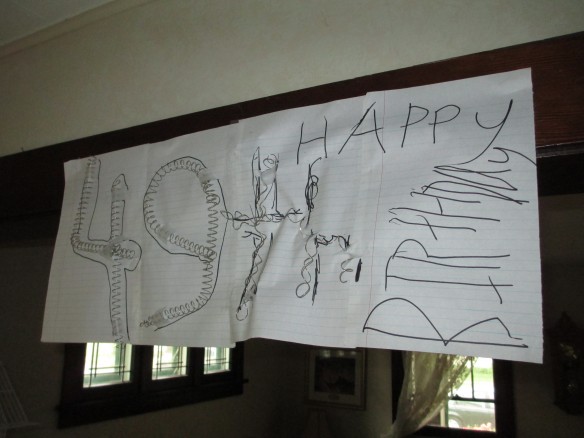 My son woke up at 6am to secretly hang the birthday sign he made for me. He obviously got the number wrong. 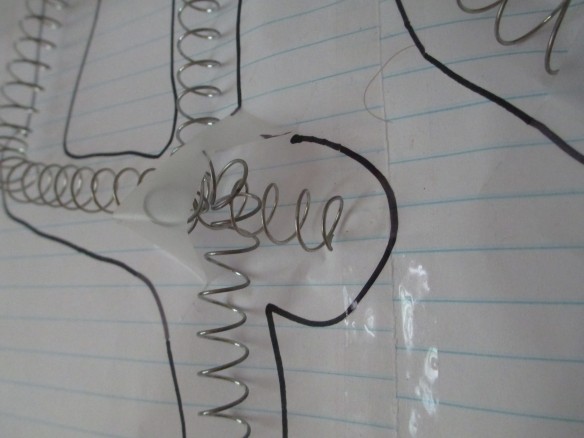 My wife made me a glorious breakfast of scrambled eggs with peppers and tomatoes. All around me children ate processed cereal from cardboard boxes.

After breakfast we got the bikes ready for the traditional birthday bike ride. (Getting the bikes ready should take ten minutes to walk them out of the garage, but somehow it always takes about 90 minutes of primping, potty breaks and packing. [That alliteration was accidental])

We rode to Myrick Park and out the Rabbit Trails, then took the La Crosse River Trail to Riverside Park. At the park I was surprised to see that the City of La Crosse had hired a band to celebrate my birthday. All of my friends, most of whom I did not recognize, were sitting on the lawn while the band played from the band shell. It was very fun. They forgot to call me up on stage to sing Happy Birthday to me, but that is okay. I’m sure they were just deferring to my shy humility. 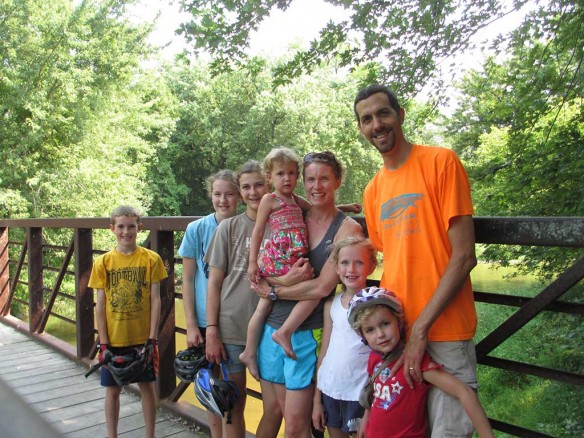 During the traditional family birthday bike ride, we pose on the bridge over the La Crosse River, part of the Rabbit Trails. 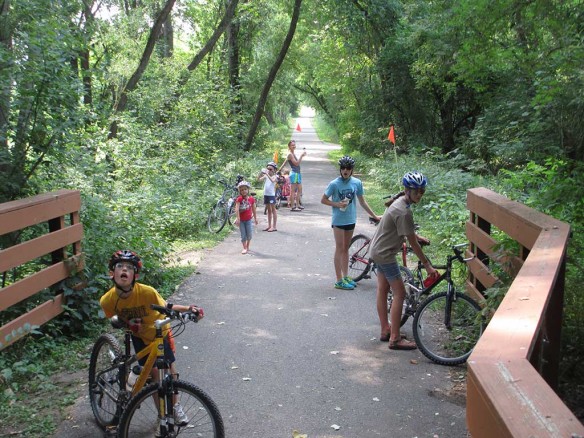 The Rabbit Trail through the marsh. Of it Edward said, “Not the Rabbit Trails! It’s paved. If you want me to ride on pavement, you should buy me a road bike. 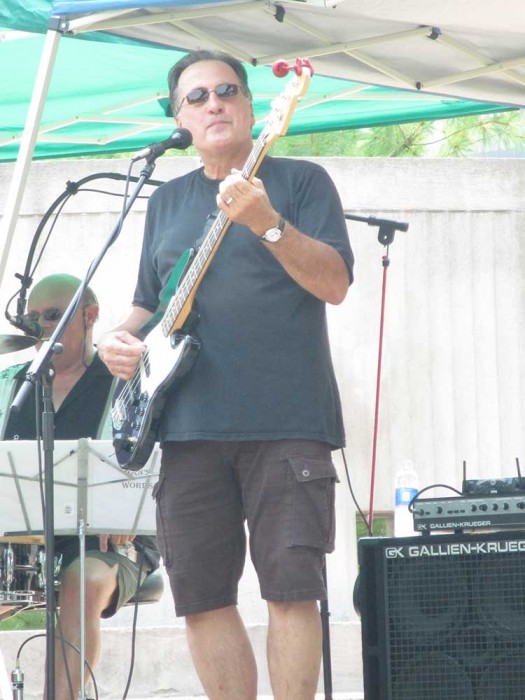 Even the president of the college, Dr. Lee Rasch, took time out of his day to celebrate my birthday. Here he is playing with his band, The Executives, at the Riverside Park Band Shell. (Really, that is the president of my college breaking the dress code on a Wednesday. I suspect he might not really know it’s my birthday.) 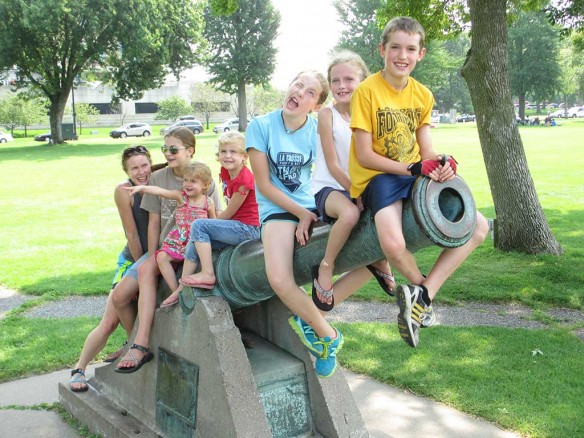 Please keep your children off the relics!

When we got home from the ride, we were dripping with sweat (it was around 90 degrees) and I started a huge water fight. This is incredible, because if you know me, you know I avoid water and discomfort of any kind. But the extreme heat melted my boundaries and I endured bucket after bucket of ice-cold water being thrown at me from puny children. Claire, ever the sneaky child, proved herself quite adept at aiming a bucket of water such that it went mostly up your nose or curled your eyelids backwards. Still, it was freezing water on a sweltering day, so we let her play. 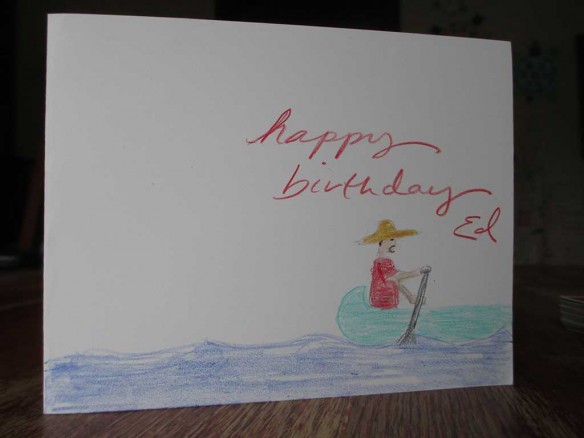 My wife’s handmade birthday card. Of it she said, “I drew the canoe and thought, ‘that’s not enough,’ so I drew the paddle, then I drew you and realized that you are holding the paddle wrong and you are way too far back in the canoe. Oh, and you don’t ever wear your farmer hat paddling, do you?”
Helen said, “Where am I? I should be in the front of the canoe!” 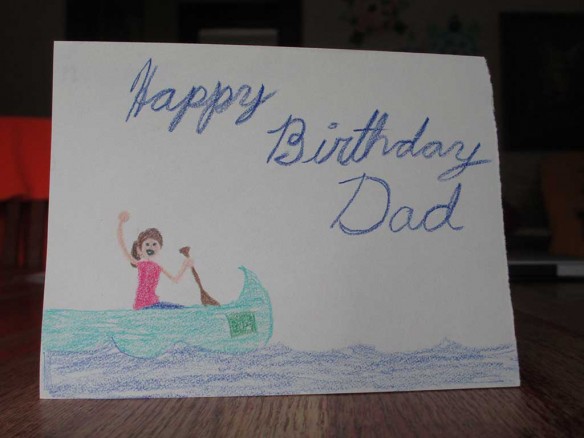 This card is made by Helen and is a response to the card my wife made. 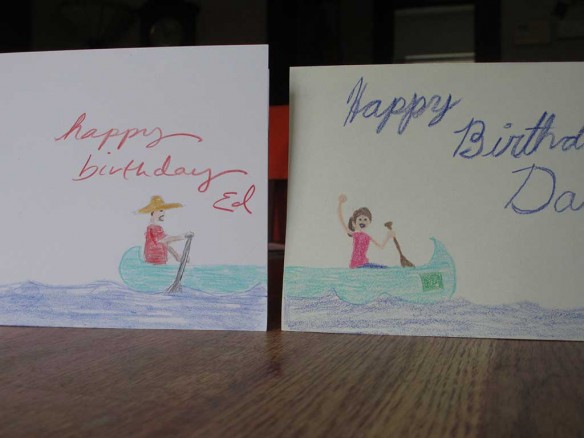 The cards that healed the severed relationship between mother and daughter.

We finished the day with a pasta feed to replace the carbohydrates we had burned during the day’s extreme activities. The meal was followed by chocolate cake and ice cream. I waited for the familiar call of “Dad, can you finish my cake?” but it never came. I cannot stand that my children are getting big enough to finish their desserts. I don’t really like maturing or aging in any form. 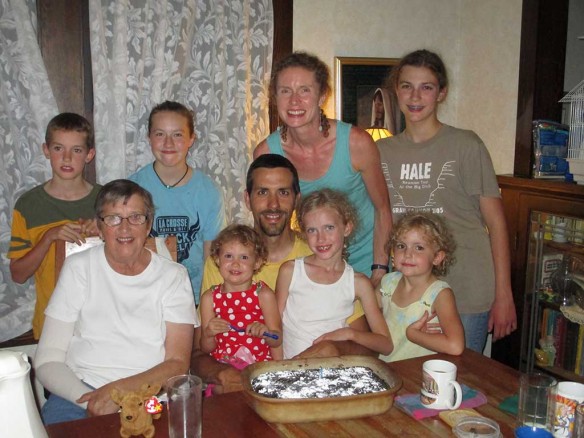 Every Hale birthday culminates in emergency chocolate cake and vanilla ice cream along with a photo of the family with the cake. Look at Claire trying with all her might not to make a really stupid face.

I hope you have a good birthday this year and the numbers on your birthday sign are much smaller than mine.