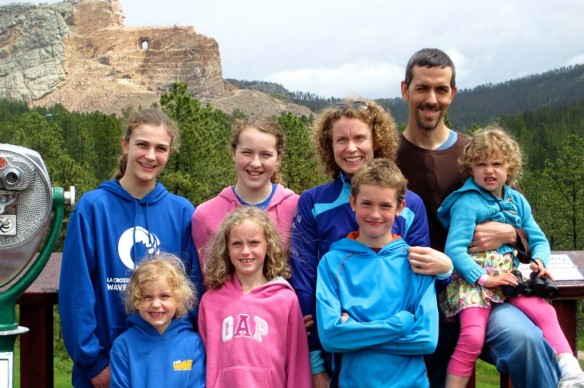 Out of a hundred family photos, this is the only one with most of us looking normal (except Lydia). Crazy Horse, South Dakota

As I type this letter I am surrounded by the happy sounds of children making Christmas cookies. Holiday music mingles with the conversation, “You’re rolling it too thin!… Stop playing in the flour!… Don’t cut them in the middle of the dough! Cut them on the edge!”

Nothing is different with the Hales. The kids are all average home school students who regularly produce the minimum work required to pass classes. Nikole is near psychotic with the stress of teaching six children, making meals, keeping the house organized and caring for the man voted best looking cyclist in Wisconsin. I am still teaching, riding bikes everywhere and growing award winning facial hair. 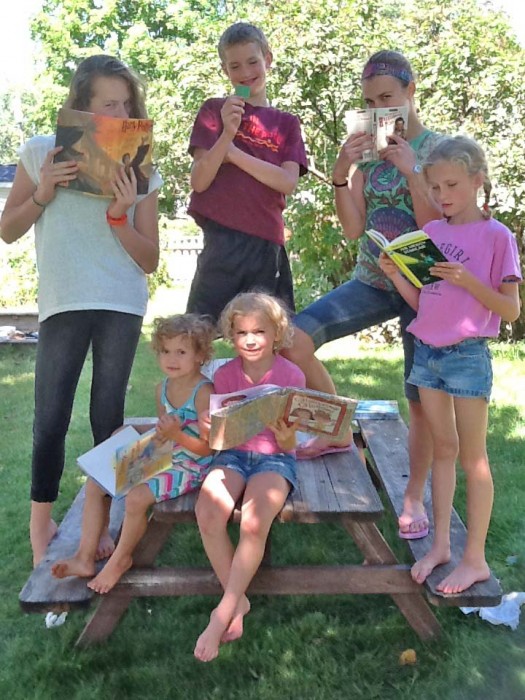 A bunch of home school kids pretending they can read.

Mostly we like to hang around the house and fine tune our mediocrity and sloth, but this summer we did something completely out of character. We went on a camping trip across the United States—a nearly impossible feat for this organizationally-challenged couple.

Proof that the Hales left the house once this summer. We slept in that tent and it rained hard.

We camped for two days near Mt. Rushmore in South Dakota. I tried the patience of my wife as I obeyed the 45-mile-per-hour speed limit all the way through Custer National Park. I was vindicated when several buffalo stood next to the road and posed for photos. We saw Mt. Rushmore in the rain. In addition to poor organizational skills, we have bad timing. 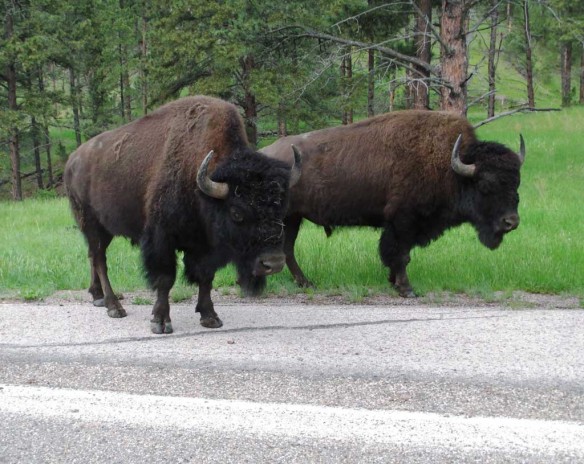 I say, “Okay guys. Hold it right there while I compose this shot.” Nikole says, “KEEP DRIVING, you moron! They could charge any time!” 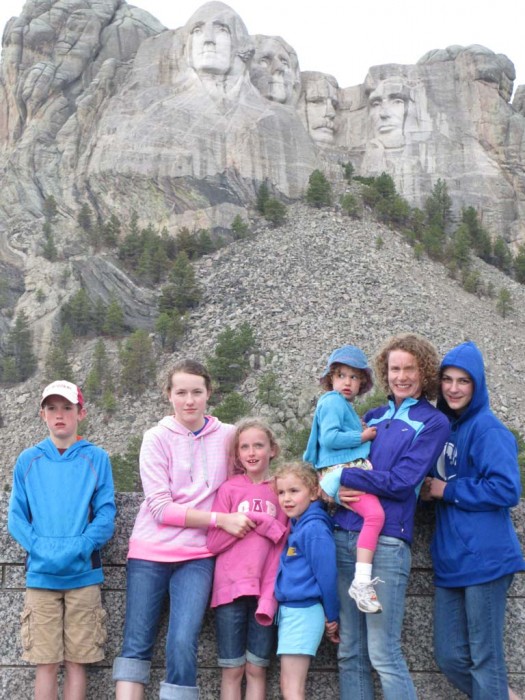 We drove through Yellowstone. Late in the day, tired and still far from our next campground, we arrived at Old Faithful geyser. We learned that it would “go off” again in 90 minutes! My beautiful wife wanted to keep driving toward our far off destination for the night, but the rest of us said, “Um, no. You don’t give up on the nation’s most famous geyser because of a little 90-minute wait.” Maybe we should have kept going—the temperature started dropping and, just as the famous water cannon went off, a cold rain came to encourage us. We watched until lips turned blue, then we ran to the van. 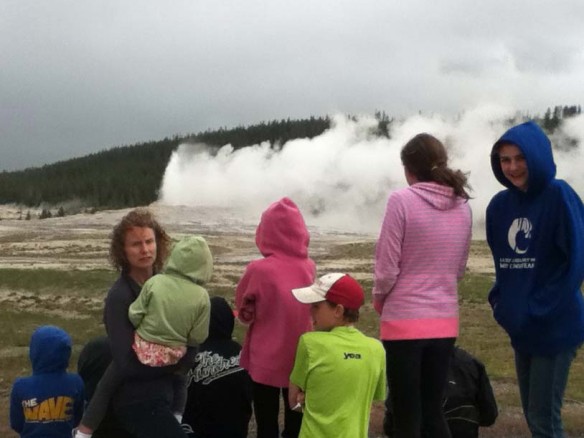 We went to the ocean in Westport, Washington. My dear wife was about to realize her dream of seeing her children swimming in the ocean. She was disappointed that nobody was captured by the lure of 55° water, crashing waves and a cold wind blowing down the beach. Instead, she watched her kids shivering ankle deep in the water. Still, it was the ocean and it was beautiful. 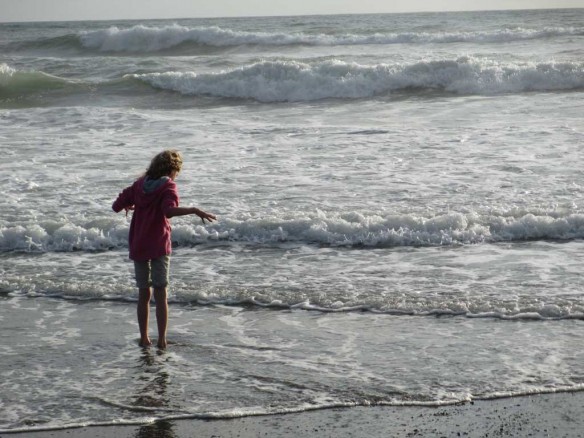 Note the sweatshirt on Ruthie as she tries to endure the frozen waters of the Pacific Ocean. No swimming today.

The day after the ocean we went to the wedding. This is the wedding for which we crossed the United States… the culmination of a 1769-mile quest. We planned our 40-minute drive from our hotel, through Seattle, to the park where the wedding would take place. A drive that Google promised would take 40 minutes took 90. They have this thing in Seattle that we don’t have in La Crosse—traffic. In hindsight, it might have been wise to arrive a couple hours early for a wedding on the other side of the continent. But we didn’t do that because we are unencumbered by wisdom. We completely missed the ceremony. We made it in time for the family photo, the dinner (Hales never arrive late for dinner) and the dance. The wedding couple, my niece and some young man who is annoyingly good looking and successful, were very forgiving. 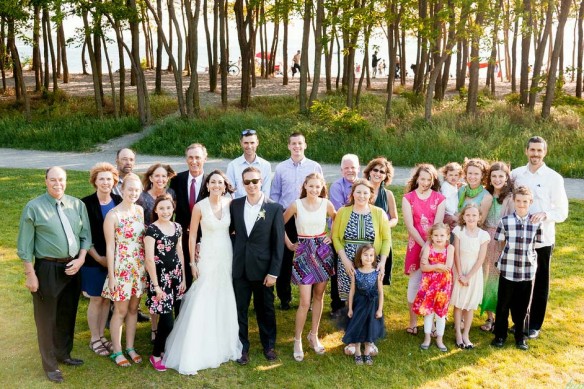 The wedding in Seattle. Even though our family is sort of separated, I assure you we were not Photoshopped in. This is the unedited photo.

On the trip back to Wisconsin the theme was “Hurry hurry, no, you don’t have time to stop and look at that!” We celebrated Father’s Day on the road. I was given a pretty Montana coffee mug, which my children endeavored to break as soon as we got home.

Nikole went to New Zealand with two sisters to visit the fourth sister who married an annoyingly good looking and talented young man from Cambridge. Nikole saw landscapes almost as beautiful as the bluffs around La Crosse, and sheep. She saw lots of sheep. While she was gone, the family almost imploded. Just before the government people came to arrest me for child neglect, my in-laws came to turn back the course of malnutrition. My wife brought me a long sleeved wool cycling jersey. That’s all that really matters. 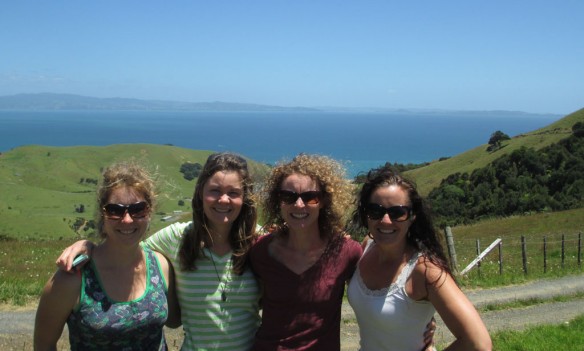 The Sisters Zellmann in New Zealand. Why would anyone want to go there? I’m sure the Hauraki Gulf is nice, but does it compare to Lake Onalaska?

We have no chickens. Our ladies were taking a lot of days off and were copping some attitude—Like, “No, don’t touch me! Get away from me! I hate you! Let’s have some food over here!” So, we sent them to a chicken retirement community run by a family friend, who, coincidentally, is known for making tasty chicken soup. I never made that connection before now. Hmm…

We went to my in-laws cabin twice this summer. Oh, the cabin conjures such glorious memories of swimming in the lake, sunrise paddles in the canoe, and broken hips. Yes, I was out on an peaceful bike ride in the country, when I got the call, “We think Nikole dislocated her hip waterskiing. Can you meet us at the hospital?” To which I replied, “Um, maybe after I’m done with my little bike tour. If I have time.” After a leisurely shower and a light lunch, I moseyed to the hospital. We learned that if you dislocate your hip in Perham, Minnesota, you either have to reset it yourself or go to a bigger hospital. I was all into the cost savings of the home remedy, but Nikole chose a helicopter ride to Fargo, North Dakota instead. Did I get a ride in the helicopter? No. I had to drive my in-laws crummy minivan. I didn’t even get to drive my huge, glorious family bus. 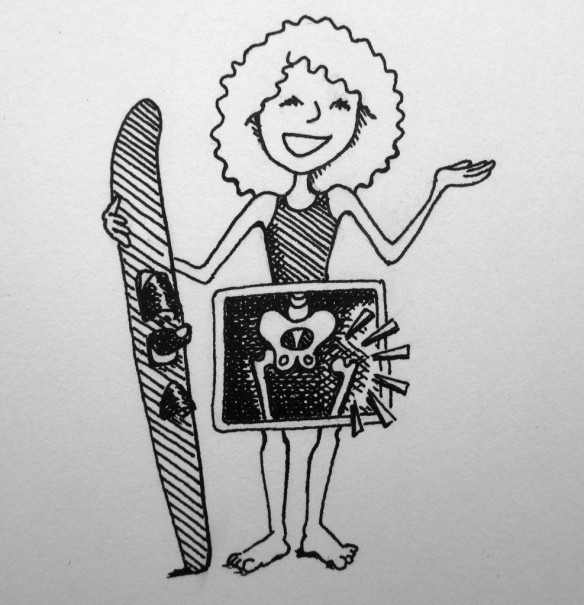 This is an image I drew just after Nikole’s dislocated hip experience. I wrote a blog post about it on our old family blog: http://eddiehale.com/family/news-updates/about-my-wifes-season-ending-waterski-injury

But seriously, we were very relieved to have her hip back in place and there was no permanent damage. I allowed her to take a few weeks off before returning to running and her quest to be the fittest woman in the Midwest.

The only other interesting occurrence was when God threw a dog into our lives. I was innocently looking through the Craigslist pet section when I was assaulted by the ad for a free yellow lab. And how was I to know the young man interviewing prospective families would choose a family suffering from overpopulation in a tiny house? It’s not my fault! I tried everything to avoid it, but now we have a dog. A big, dopey, blockhead dog who mostly lays around and eats an occasional shoe. I want to get rid of him, but the kids like him and Nikole thinks there is some value in a dog who lets four-year-old Lydia lay on top of him twenty times a day. So I guess he stays. And even though they all promised me I would not have to take care of him, I’m the one taking him on the two long walks every day. I enjoy kicking him when nobody is looking. 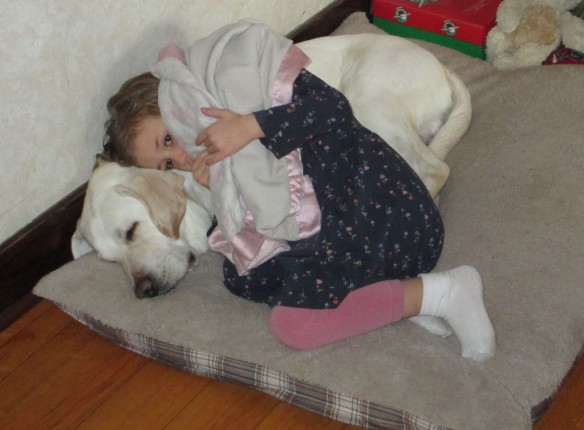 I ain’t never seen a dog like that before. Best dog ever, I think.

Editor’s Note: Though my husband tries to forget it, we have children. I required him to mention them and he came up with the following:

15-year-old Helen is, humble and kind. She loves drawing, reading and she swims. On rare occasions she practices driving our car, but she is afraid to drive the huge, glorious family bus. She takes care of our pets. 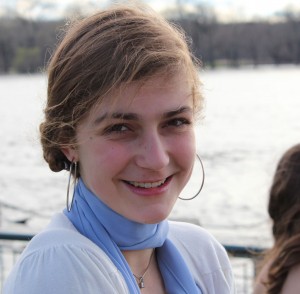 The kind and gentle Helen dressed up for homeschool prom

13-year-old Claire is suspicious and mysterious. She loves swimming—like it pains her to miss a practice. She also loves reading and drawing realistic portraits of famous people. We try to get her to draw family members, but why would you want to draw a sister, when you can draw that girl from Harry Potter. Claire hates pets. 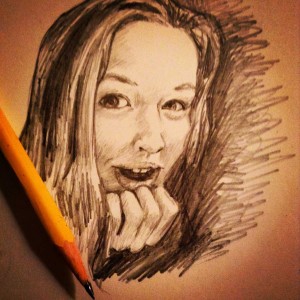 A drawing of Claire by Claire. The poor child has no talent. 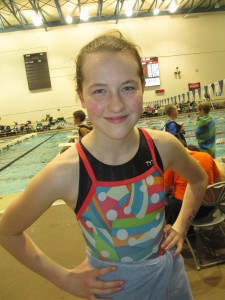 Swimming, swimming, it’s all about swimming. Don’t talk to me about running or cycling. I only swim. 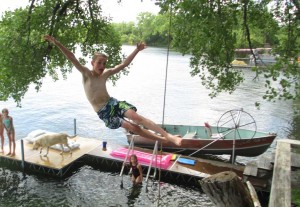 Edward, the directionless, chooses “down” into the lake.

Eight-year-old Ruthie is sweet and conniving. When she’s not stealing someone’s candy, she’s reading or playing the piano. She tries to draw like her older sisters. 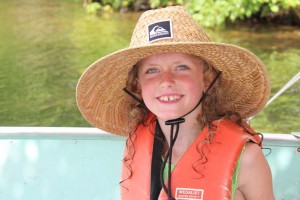 This photo shows the sweet side of Ruthie. But rest assured, she just pushed some kid in the lake or something.

Six-year-old Bethany is innocent and giving. Her only vice is she’s the one who, when the world is quiet and peaceful, will bash her head on the corner of a table and burst into tears. Other than that, she is the source of all things good and pure. 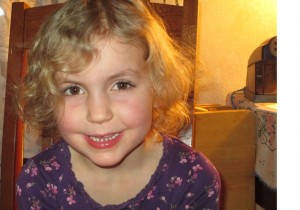 Four-year-old Lydia is an adorable possessor of as yet undetermined vices. She plays with dolls and whispers mysterious intrigues. She lays on the dog every few minutes. 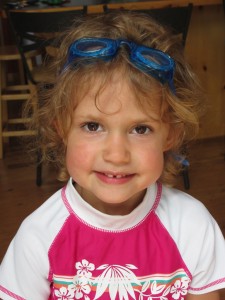 Lydia at the lake wearing googles she never takes in the lake. They are a fashion statement.

That is a fairly accurate recounting of the past year in the Hale house. Once again the Lord has blessed us with 12 months of relative peace and good health (hips aside). We hope you too have had a good year, and we pray that God will bless you with peace and good health in the coming year.

2 thoughts on “The Hale Family Year in Review”