Six Annoying Children, A Good Looking Man, and A Woman on the Edge

This summer, we drove to Colorado for a Hale family reunion. We picked up some old guy hitch-hiking just outside La Crosse, and he turned out to be my dad. He enjoyed a long, loud ride out west with his grandkids. After we got back home, we didn’t see him for a month. 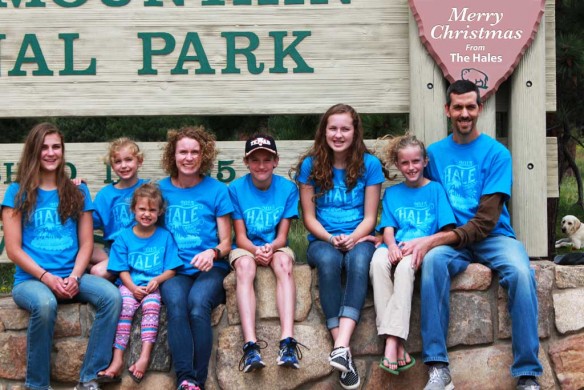 The Hales in Colorado, in front of the Rocky Mountain National Park sign. 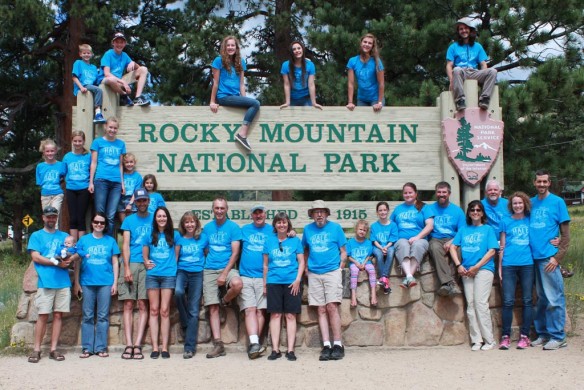 There were a lot of Hales in Colorado this summer. And some Maedkes, Haases, Henrys and Wardens

I realized a lifelong goal this summer, when I raised chickens from eggs. I told the kids the chickens would like us, if we were the first thing they saw after they hatched. They are grown now. They hate us…  and run when we approach. 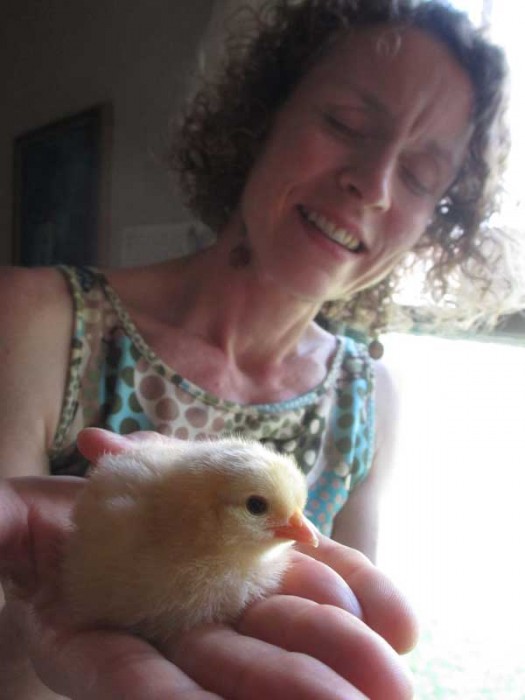 Nikole with one of my homegrown baby chicks before said chick understood he should hate humans. 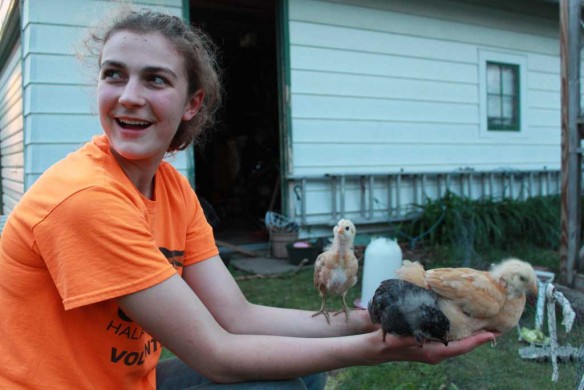 Teen-aged chicks are not pretty. This was about the last time they thought we were okay.

The end of home school (for the big ones)

Home school was so lame, we decided to send our kids to a brick and mortar school. The kids were so distressed to leave home (except for sane Helen) that we feared they might have a cumulative nervous breakdown. But after three months at Aquinas Catholic Schools, they find they enjoy being socialized. 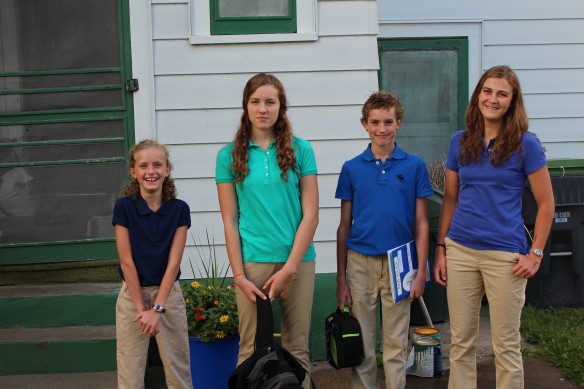 Some members of the family were less than enthusiastic about going to school this year.

Lydia (5) is cute. She mostly lays on the dog and sucks her thumb. She will play the piano, when forced. She is home schooled. This year, Lydia learned to swim – like really swim with her face in the water and turning her head to the side to breathe. She also learned to ride a bike, which you can do anywhere, unlike swimming which requires a pool. 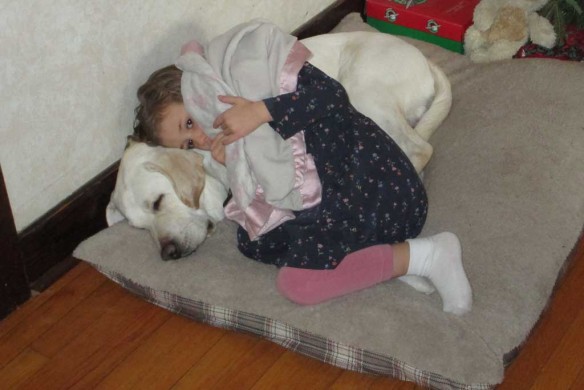 This is the scene every day, at least once a day. 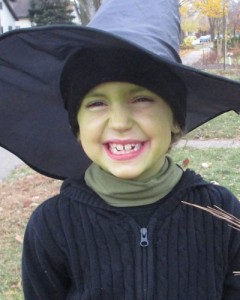 My photo curator, Claire, promises this is the best photo of Bethany from 2015

Bethany (7) is cute. She mostly does crafts and lays on the dog. She likes Barbies. She is home schooled. Bethany enjoys crying on the piano bench, just like her older siblings did. Bethany likes swimming on the swim team, and looks forward to the competitive meets. 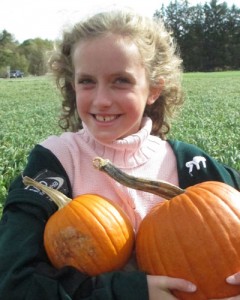 Ruthie purchasing two Halloween pumpkins when most kids are satisfied with one.

Ruthie (9) is cute. She mostly likes to read books. It is all she does. She mostly reads when she should be doing something else like clearing the table. She is in 4th grade at Blessed Sacrament School where she has fooled the teachers into thinking she is a good kid. We regularly get reports of her angelic behavior, hard work and attention to detail. At home, the mask comes off. Her countenance glazes over when we give her a directive. I am convinced that when she is told to do anything, her soul leaves her body and reads on the couch. If I say, “Ruthie, clear the table.” She looks off into the distance, moves toward the table as if to obey, then turns and joins her soul on the couch. 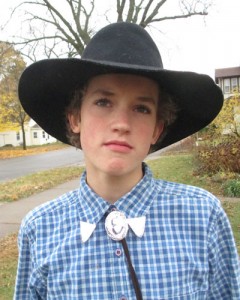 I told Edward, “Look serious off into the distance.” Nailed it.

Edward (12) is not cute. He mostly dribbles basketballs — in the house — when we have decent folks over. He also does tricks on his scooter (outside) and rides his bike. He can only do homework between the hours of 10pm and midnight. Edward is in the 7th grade at Aquinas Middle School. He also has fooled his teachers into thinking he is a good kid, to the point that he was named student of the month in November. Edward was recruited onto the middle school basketball team by a coach with very poor judgment. He dominates the floor the way Michael Phelps might dominate Kobe Bryant. Yeah, he plays like his dad. Marble runs and Legos are still big with Edward. In nice weather, he rides with the middle school all-city mountain bike team. I would say he rides for the mountain bike team, but that would require his father to fill out forms, make deadlines and leave the house and drive places. 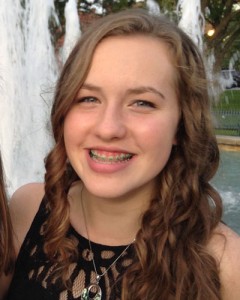 One of the many trials Claire was forced to endure at her “real” school was the Homecoming dance.

Claire is 14 years old. She mostly swims. I mean she is really into it. She would miss parties, meals and family fun time, to go swim back and forth in a cold pool. She is sort of fast. She was the big holdout on going to an out-of-home school. Now she is the one rushing the others out the door to get to school on time. (For Claire, “on time” means 30 minutes early.) She enjoys gym class games that involve throwing balls at other kids’ heads. She nails the other kids in the head and looks innocent to avoid doing punitive push-ups. She shows no signs of success in high school. Claire gets good grades, but is only on the lame honor roll. She is not on the high honor roll, which vexes her greatly. She is on the all-academic team. Claire was also named Rookie of the Year on the high school swim team, and, she lettered in swimming. (We’re praying she adjusts to school.)

The famous actress, Helen Hale, back when she was a nobody in the Missoula Children’s Theater.

Helen is 16 years old. She mostly does social. She acted in the Missoula Children’s Theater play this fall. She attended Christian camps this summer. She joined the Art Club and the Journalism Club at school. When she is not social, she is doing homework. She loves to read and draw. Helen is also a swimmer who won all her events at the prestigious Winona Invitational International Swimming Championships Preseason Opener. This summer, Helen water skied to please her mother. To the astonishment of everyone, she dropped a ski and slalom skied, just like her mom at 16.

Nikole is beautiful. She mostly does family maintenance. She teaches elementary home school. She is constantly (no exaggeration) driving one of the kids somewhere. She somehow finds time to cook gourmet meals, because no one else in the family can cook, as they are too busy swimming and reading books. This summer, the formerly broken Nikole chose to tempt fate by water skiing again. Fate lost and Nikole won, returning to shore every time with nothing broken and all her joints in-place. Nikole just keeps getting fitter and fitter. She gets up early and goes to the Y to exercise with the other Catholic school parents. We all laugh at Nikole, because if any of us say, “I met a kid named such-n-such today.” She will say brightly, “Oh, I workout with his/her mom!” She works out with everyone’s mom. Nikole continues to be the glue that holds us all together. 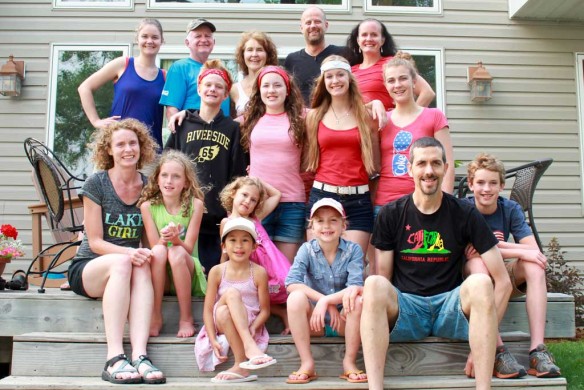 Some of the Zellmann clan at West MacDonald Lake. The lake that tried to break Nikole, but failed.

I am a pile of worthless. I mostly avoid work. Not when I go to work… then I work fairly steadily. But at all other times I try to stay far away from anything that might make me think, struggle or sweat. If not for dog walks and an occasional kid-taxi mission, I might never get out of bed. I help kids with homework. I would enjoy doing other things, like working-out with Catholic cyclists, but I am up too late doing my children’s homework. While my wife gets more chiseled, I get softer. My artist muscles are weakening too. I can barely draw a stick figure anymore. 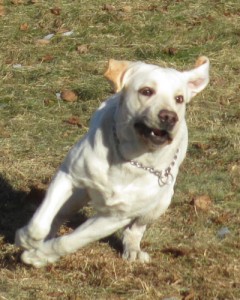 I searched to find the most flattering photo of Jack.

Jack the dog is dopey. If Nikole is the glue that holds the family together, Jack is the Valium that holds my sanity together. Every morning when I want to roll over and cry, “What’s the point?” Jack is there to tell me how much he loves me and that I am the best thing that ever happened to him. He insists I take him on a long, morning walk. As we walk he goes on and on about how beautiful are the leaves, the trees and the sky. His favorite verse is “The heavens declare the glory of God.” He repeats it over and over again as we walk. Outside, I am forced to say positive things like “Good morning” to neighbors, and soon I may begin to think it is good. When I leave for work, my dog pretends to be sad. When I come home from work and am about to curl up on the floor and cry, “What’s the point?” Jack is there, telling me that his day was a black pit of despair without me there. He reminds me again, that I am the light that makes life worth living. He insists I take him on another long walk, during which he barks at children, little old ladies and anyone else who appears to be completely innocent. And when I go to bed, he tells me, “Dad, I love you, and I promise I will not go upstairs and sleep on one of the human kid’s beds.” He is a liar. 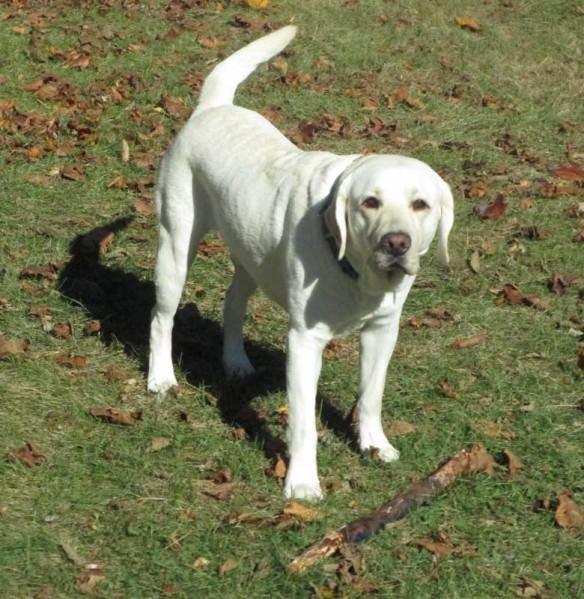 Jack the dog looking fairly normal for a change.

As I proofread this, I thought, “All my friends are going to wonder why he hates everything and gets joy only from his dog.” Rest easy, my friends. My kids also do a fairly good “Welcome to the Morning” and “Welcome home from Work” greeting. And a kid who wants me to read a book can get me out of the fetal position. The Hope of Heaven also gives me great peace, as do Christmas movies, bicycles and my supermodel wife.

We hope you have a good year with kids less weird than ours, a house cleaner than ours, and a dog who sleeps in the dog-bed you bought him. Merry Christmas.