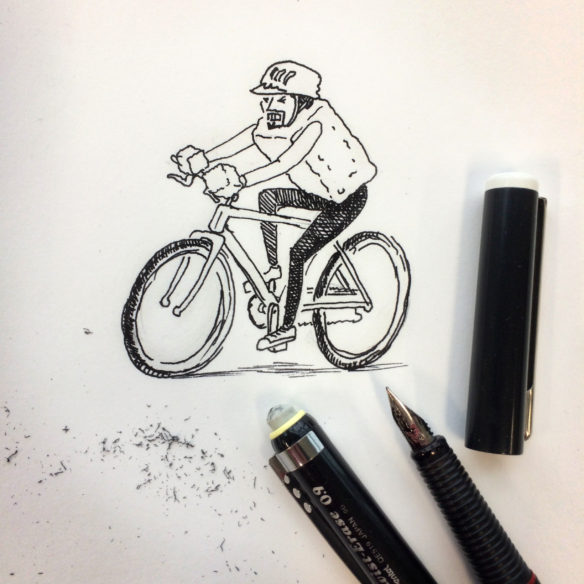 I drew a sketch of a frozen cyclist. It is not meant to look like anyone we know

This past Saturday I went on a little bike ride with my sister. My crazy sister is turning 60 years old next year, and decided she wants to ride 60 miles on her birthday. She asked me if we could train together sometimes, and I thought, “Lady, I could ride 60 miles before breakfast and again after lunch.” (I don’t struggle with pride. I am just awesome.)

I was a little late to Laurie’s house and we began our ride at 3pm. It was 51 balmy degrees. I wore two long sleeved shirts and a jacket on top. I wore fleece lined tights on the bottom. I thought, “I am going to roast out there.” And I would have roasted, if it were 51° at 3pm in June. But it was November 27, and the sun was laughing and saying, “Look at the idiot in the yellow windbreaker. I am going to bed soon, and he is going to be a popsicle. (Hey, why is that hot chick riding with freaky, yellow, twig man?)

We started out heading north through Winona, Minnesota, and after a few miles, I noted that it felt cooler than I thought it would be. I kept telling myself, “I can feel a little cool for a couple hours.”

When my sister’s phone announced, “You have gone 10 miles,” my torso announced, “I am freezing.” I was glad I wore my winter gloves. I thought back to when my sister asked if I was going to wear my fleece jacket… my beautiful, red, fleece jacket that right now was hanging uselessly on the back of a chair in my sister’s dining room. Why hadn’t I worn the jacket?

The sun was in South America now, and the temperature was dropping fast. I was trying to hide my frigidity from my sister. Around mile 15, I swung my arms around trying to force blood into my frozen fingertips. My sister asked if I was cold. I confessed I was getting cold. I asked, “Are you cold?”

How was she fine? She had no windbreaker and she was wearing thin, leather driving gloves. I am the seasoned cyclist. Why am I the one hurting? And I had no idea where I was. Were we 10 miles from home, or 2?

A few minutes later, we rode up to Winona Lake, and I knew we were close to done. My sister asked, “Do you want to ride around the lakes, or head for home?”

Oh the knowledge that we were on the “downhill side” of this ride gave me renewed strength. I was the great explorer headed home for a hero’s welcome. I was going to live!

Three miles later, my bike was leaning against the garage door at my sister’s house, and I was running for my street clothes. With my ice cube fingers, I put on every bit of clothing I had. My sister made hot coffee, and after I drank that, she fed me hot chili.

I drove home with the heater on full blast, drinking more hot coffee.

2 thoughts on “An Unfortunate Miscalculation In Cold Weather Riding Apparel”