Editor’s Note: In the past the Hale Christmas letter has leaned too far towards self-depricating humor. This letter is an effort to push the pendulum back toward the center.

Laying on the Awesome, Thick and Strong

One of my kids recently justified her lack of goals by saying, “But, Dad, you always say how we are mediocre in our Christmas letter.” So, I had to explain to that child that “mediocre” is a joke, and the “Awesome” runs deep in the Hale family.

In a former life, Mr. Hale was an intimidating cyclist. Mrs. Hale, in her youth, was a three-sport varsity athlete. Both were straight-A students. Are you feeling the seeds of awe?

The biggest family news is that the local Catholic prep school so desired the presence of the Hale Awesome Train that they offered each of the kids a full-ride scholarship. Now, the formerly pajama-clad home schoolers must rise at the unmerciful hour of 6:30am to prepare for the freezing trip to school. Twice a year Nikole and I are forced to sit through parent-teacher conferences to hear how polite, conscientious, and hard-working our kids are. We just hold up our hands and say, “You don’t have to tell us how awesome they are. It’s genetic.” 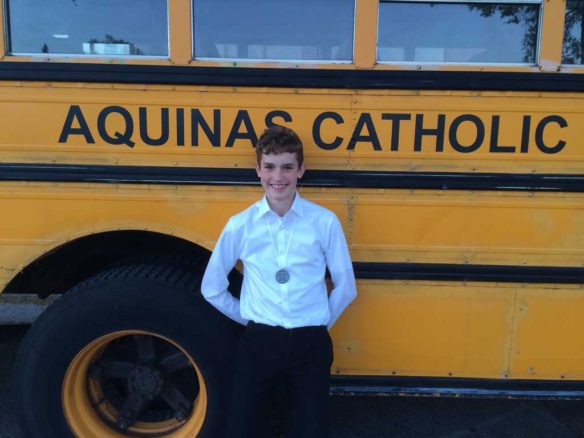 Swimming is still the dominant sport in our family, and our kids regularly dominate. When average kids are honing their Xbox skills, the Hale kids are honing their front crawls and flip turns. Helen and Claire both lettered on the high school swim team. Bethany recently qualified for the YMCA State Meet. They are all just getting stronger, more chiseled and… well… awesome. The only un-awesome part of swimming is the constant driving to three different flavors of practice. Sometime after Lydia graduates from high school, we plan to have our first supper together. 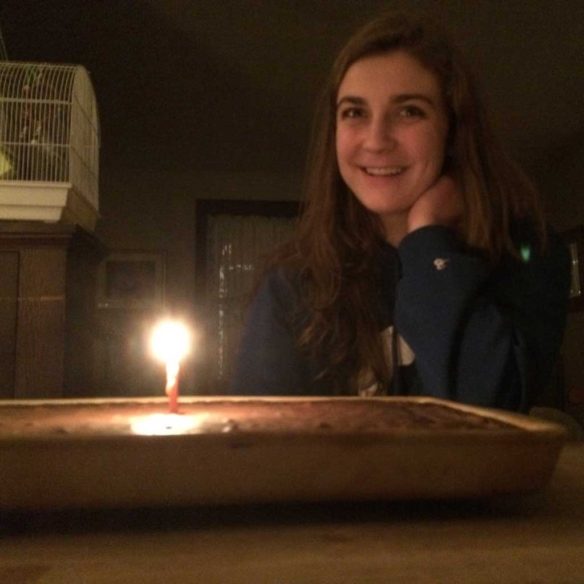 The most beautiful 17-year-old in the mid-west. Now she is almost 18.

Helen (17) manages to be awesome on five or six hours of sleep every night. Helen does sports, helps with the school play, and is constantly working on an art project. She hangs out with the church youth group. Helen does well in every school subject, including the very un-artsy subject of math. It is not uncommon for her to be at the table working on an oil painting, and suddenly lean over and say to a sibling, “You gotta use the quadratic formula for that problem.” (What even is that?) I want her to become a professor of mathology, but she has this silly notion that she might go into art. This past summer Helen was a landscaper. She built stone walls. She moved tons of earth with shovel and barrow. She got tan. If Helen could, she would spend all her time painting, drawing and reading books. Helen is my favorite child, because she enjoys going to the coffee shop with me and drinking chai tea. (She drinks the tea. I drink manly coffee.) 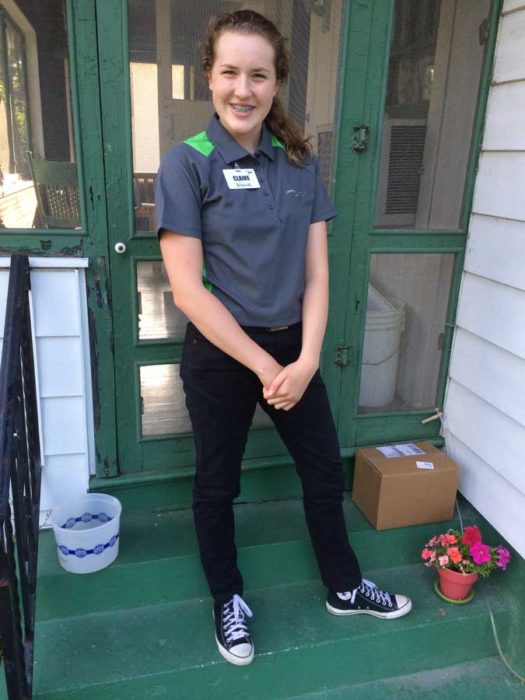 Claire getting ready to spread the awesome over Festival Foods. She won’t put the 64-ounce can of beef on top of your bread.

Claire is awesome and thinks all of you who start your paragraphs with something like, “Claire (15)” are lame. So, I will not tell you how old Claire is. Just know that she is somewhere between Helen (17) and Edward (13). She cannot yet drive a car. She is a couple years away from voting. Claire spreads the awesome pretty evenly over her life. She was at the top of the high school swim team. She is number 1 or 2 on the YMCA swim team. Claire enjoys rising before the sun. She showers, eats breakfast, gets beautiful and spends the hour from 6:30-7:30am tapping her foot and saying, “Can we leave for school now?” Though she claims to dislike it, Claire is thriving at high school. She gets excellent grades (except in that stupid class about biology. But who cares about that?). On every third Saturday, Claire works as a bagger at Festival Foods. If Claire were free, she would spend her time reading books, and drawing perfect illustrations of superstars and ballerinas in the margins of her biology notebook. 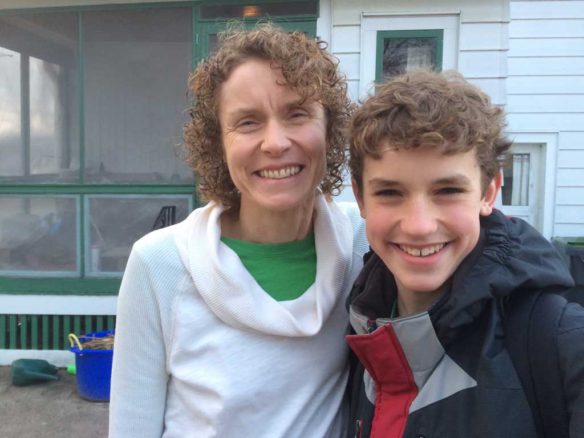 This photo was chosen because Claire said Edward looks cute in it. Yes, let the record state that Claire thinks her brother is cute.

Edward (13) is awesome because this year he raced mountain bikes. I need say nothing more. But I will. Edward joined the all-city mountain bike team, training and racing on the ratty, old, used mountain bike his father bought for him. He so distinguished himself that the coach placed him on a loaner Trek Excalibur 6 Hardtail 29er. On the new bike, he quickly rocketed up to the same position he occupied before the new bike… but, man, did he ever look good. Edward made the podium in three of the four mountain bike races and helped the team to place fourth in the state. Edward is awesome in school and gets good grades, but just to keep it real, he gets a C in religion class. If Edward were a free man, he would read books and build Lego creations all day. He hopes to become an engineer and get a job at Lego. 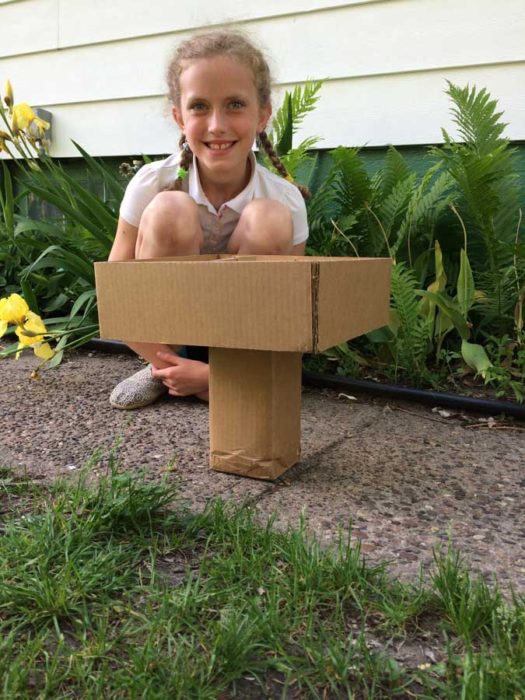 Having dominated the egg drop competition at school, Ruthie poses with her technology. (That’s right. Three drops from three stories. No sweat.)

Ruthie (10) is awesome because she likes to hang out with her dad. She and I work on social studies homework together. She still likes me to read to her. Ruthie swims on the YMCA team like all the Hale kids. Ruthie began her volleyball career this year — and there are few things more awesome in athletic prowess and volleyball awareness than a fifth-grade volleyball team. (Well, maybe more than a few things.) My greatest hope for Ruthie’s awesomeness is her desire to be on the all-city mountain bike team next year. Before the snow ruined everything, she and I would regularly go on rides in Hixon Forest to train for next year. I can see us now, traveling to mountain bike races together… me consuming coffee and M&Ms in the driver’s seat and her reading out loud to me from the passenger seat. When Ruthie grows up she is going to be a lawyer, “…because they make a lot of money.” 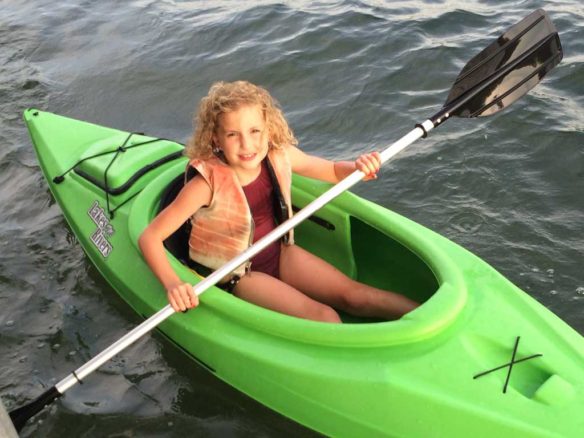 Explorer, Bethany Jane, leaving for a paddle around the lake.

Bethany (8) continues to be awesome in her complete selflessness. She is a sweet child and has so far resisted the Creep training she gets from her siblings. Bethany is responsible. She gets her homework done on time. She, like her sister Claire, enjoys arriving early for school, but unlike her big sister, she does it without the toe tapping and harassment. Bethany cannot spell. When she is not studying for a spelling test, Bethany is playing pretend games with her little sister (that usually involve being clad in swim suits while the wind chill outside is -30°). 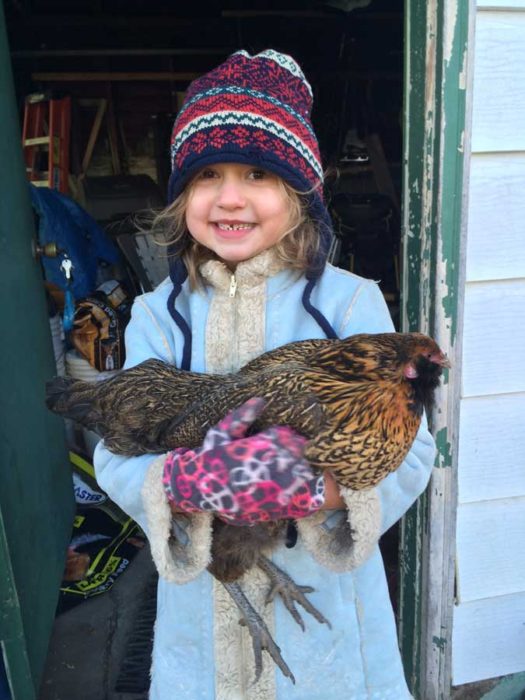 Farmer girl, Lydia, holding one of her backyard hens.

Lydia (6) is a wildcard. She is very smart, but displays awesome stubbornness. She can read, but she would rather plant her feet, clamp her mouth shut and refuse. Lydia swims competitively, like her older siblings. She plays with her dog. She starts works of art, but seldom finishes them. If Lydia were free, she would play with her dog and move in with her friends across the alley. 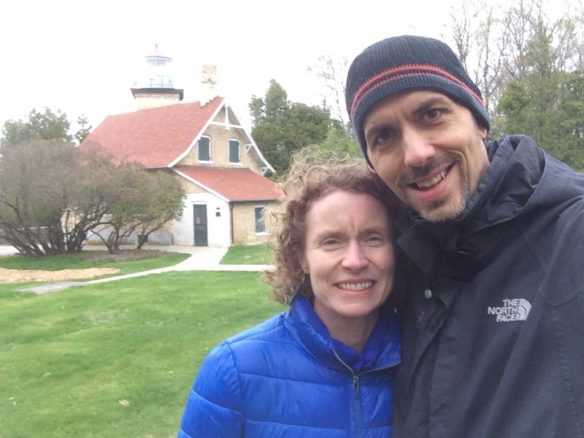 Nikole (young) is the same. She runs. She lifts. She rides those silly stationary bikes at the YMCA with the other creatures of the pre-dawn. She cooks for her army platoon. She attends a Bible study. She volunteers at her kids’ schools. She’s, like, awesome. She drives children around a lot. I seldom see her. This fall Nikole went to Uganda with several lady friends to teach women to sew on treadle sewing machines. She also taught the women about human trafficking, hygiene and female things that manly men like me just don’t want to know about.

I am awesome at school, where I teach children to draw with their hands and with computers. I teach them how to build web sites. And the state sends wheel barrows full of cash to my bank. My athletic awesomeness is waning. My only physical activity is walking a very worthless dog every morning. I am sure if I had a few more bicycles, I could find the time to ride them. But my backward-thinking wife believes that seven bikes and a tandem are enough. How could I possibly stay interested with only seven bikes? Not awesome. Because Western Technical College is not big enough to contain my awesomeness, I got a part time job at Duluth Trading Company. No, I am not designing their catalog. I am selling pants and underwear to tradesmen. It is a very fun job. The boss likes nothing better than to see me talking to some old guy about what he does for a living and the proper length of a belt. When I am not teaching or selling extra-extra-extra-large t-shirts, I like to draw. I draw doodles in my journal. And I draw involved illustrations with my classes at school. If I were a free man, I would ride bikes all day and draw dog portraits all night. 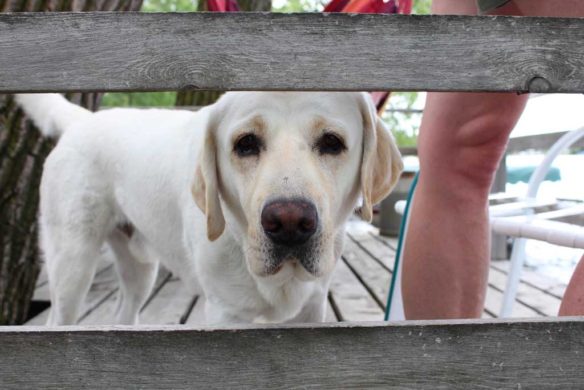 Jack hanging at the lake and smelling like a wet dog.

Jack the dog is very consistent. He is very obedient, if you are holding a dog treat. He enjoys running with his mom. He also enjoys mountain biking with his big brother. He really enjoys sleeping.

My editor suggested I include one serious paragraph, and I said, “What do you mean? It’s all serious (except the part about full scholarships to the Catholic school).” So, seriously, we have had a pretty good year. Our little house is still standing. Everyone has at least one bicycle. We are all well fed. We hope your life is ten times more awesome than ours… as if that is even possible. And we hope you have a happy Christmas.