I was putting the final miles on a perfectly fine bike ride when my cell phone rang. It was my mother-in-law. I was about to joke that she was my second cell phone caller ever, but she cut me off saying, “Your wife is injured… we think she has a dislocated hip.” 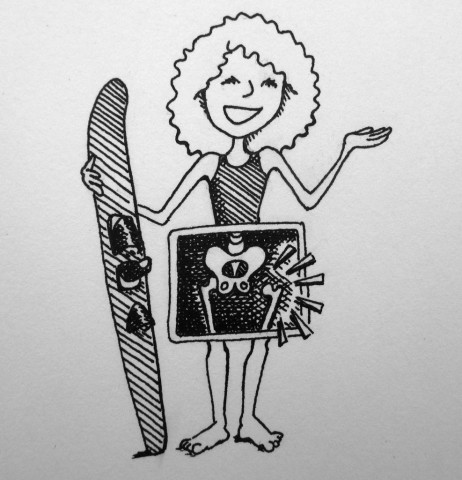 Nikole reports that during the trauma, she wore a slightly different expression. I wouldn’t know — I wasn’t there for most of it.

She was out water skiing with the neighbors when she made a cut across the wake – a move she has made a thousand times before. Something went awry and her right foot came off the ski. She crashed and the ski dug into the water and arrested the motion of her left leg, while her body kept moving into a somersault and (graphic content alert) the ball of her left femur was DISLOCATED.

The boat circled around and she said, “There’s something really wrong with my leg.” She slithered up onto the back deck of the boat, while everyone speculated on how they might get her back to shore. They ended up lifting her into the boat and made for land.

The boat drove up to the dock at Zellmanns’ cabin and Nikole’s father, Roger, carried her up the fifteen steps to the cabin. After a short triage, the neighbor carried her the rest of the way to the car. (Notice how I narrowly missed all the carrying? I seem to be very adept at being scarce when work is being performed.)

Roger obeyed some, but not every law governing the use of motor vehicles on Minnesota highways as he drove Nikole and her mom to the hospital in Perham, Minnesota. (Helen, who is going to be a great mother herself someday, was left at home to take care of the kids. Oh, and I was still out enjoying a leisurely bike tour in the country.)

When I finally got home, got presentable, and got to the hospital, I learned that I would be driving to Fargo… North Dakota. My wife did indeed have a dislocated hip, and she needed to see an orthopedist in North Dakota. Isn’t North Dakota like a different state? Yes, it is. But apparently it is only an hour and a half away from here.

As I drove highway 10 to North Dakota (observing Minnesota traffic laws like the boring, careful man I am), Nikole was flying over my head in a helicopter. My wife… stay-at-home mom… baker of bread… wiper of noses… becomes the most exciting ER patient of the day, and the recipient of a ride in a flying ambulance. I am very proud of her.

In Fargo, I stood in the waiting room because they would not let me go in to see her right away. I thought, shouldn’t someone offer me a warm blanket and a cup of coffee? What kind of hospital is this when nervous husbands are just left out in the cold? But no! Like most hospitals, all they care about are the patients.

When I did get in to see her, she was all better! She said, “Look! My leg is straight!” They had mildly knocked her out and, according to the doctor, gave her leg a pull and a nudge and “pop” it went back into place.  The doctor also mentioned that it wasn’t actually him who popped it back in, but it was the 17-year-old kid who we thought was an orderly but who was actually a med student. Then he said, “This kind of injury is very rare in someone your age. We see it all the time with people who have artificial hips. But we never see it in someone your age.” Again, Mrs. Average Mom is actually Mrs. Extraordinary, today.

A CT scan showed that none of the hard tissue was damaged in the crash. After the scan, my wife practically hopped out of bed and pranced down the hall to prove that she was worthy of being discharged. After buying some very strong pain reliever at the pharmacy, we burned rubber (in my father-in-law’s van) to get out of North Dakota.

I must say, my wife was not very good company on the way home. She dozed most of the way. I just don’t understand why she did not want to talk to me about her hopes, dreams and ambitions. But alas, I comforted myself with coffee and National Public Radio.

When we got home there was a great reunion with much hugging and shedding of happy tears. Every daughter ran at her mother with open arms as if they were going to tackle her, and every child had to be preemptively tackled herself to prevent further injury to her mother. (I could not tackle Helen and Claire, our Olympic swimmers… they got more of a hockey style hip check to deflect them from flattening their mother.)

So, it was sort of a bad day. But then again, for a trip to the ER, all the pieces fell into place very well. And the issue was resolved relatively quickly. We were home for supper. And nothing is broken, AND SHE’S, LIKE, WALKING AROUND AND STUFF! For a day in the Emergency Room, this one turned out great.

We are all super happy to have her home, and we are praising God that it all turned out so well. And we are hanging up the water skis for the season (frowny face)

This entry was posted in News updates. Bookmark the permalink.