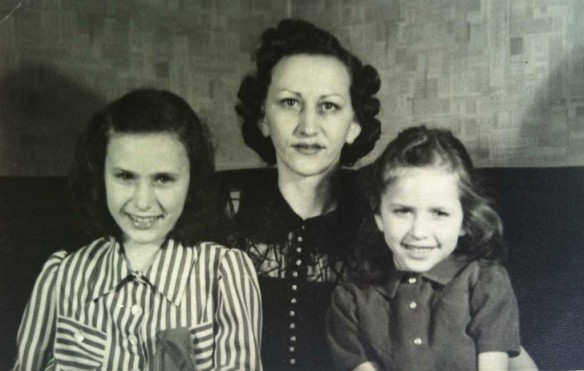 Mary is on the right, with sister, Jo Ann and mother, Hazel. 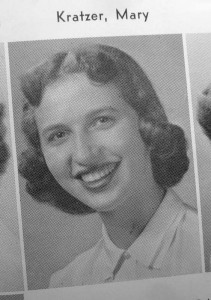 Mary Kratzer’s Aquinas yearbook photo. This is probably a copyrighted image and I am going to be in deep trouble. But isn’t my mom cute?

At Aquinas High School, Mary roamed the halls with, but did not notice the good looking Edward Hale. During her senior year, she went to a dance with her friends Mick (Wilder) Klein and Joe Wilder. Joe’s best friend, Ed, asked Mary to dance and the rest was history. Shortly after they became an item, Ed joined the Air Force and was deployed to Larson Air Force Base in Moses Lake, Washington.

When Mary graduated from Aquinas, Ed came home on leave to see her. Mary must have been irresistible, because, shortly after Ed went back to Larson Air Force Base, Mary received a letter containing a marriage proposal. Mary sent back a letter accepting his proposal. 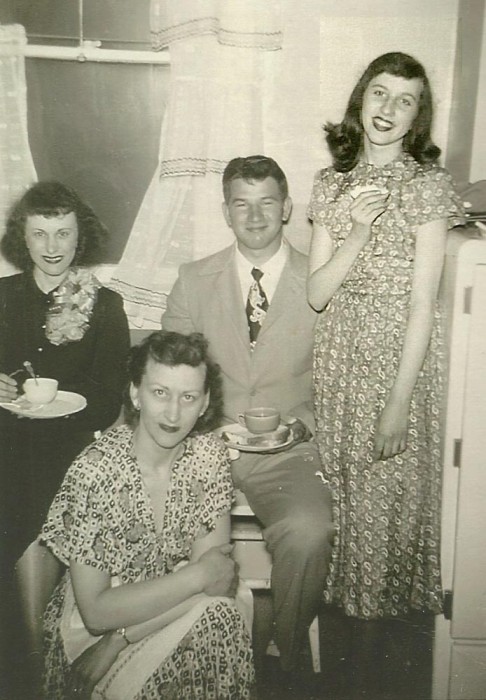 Who wouldn’t try to marry that cute chick? I understand why my dad was afraid to approach her in-person, but had to propose by way of the U.S. Postal Service.

The next Christmas, Ed came home on leave and married her. A week later, she and Ed were on a train headed for Washington State. 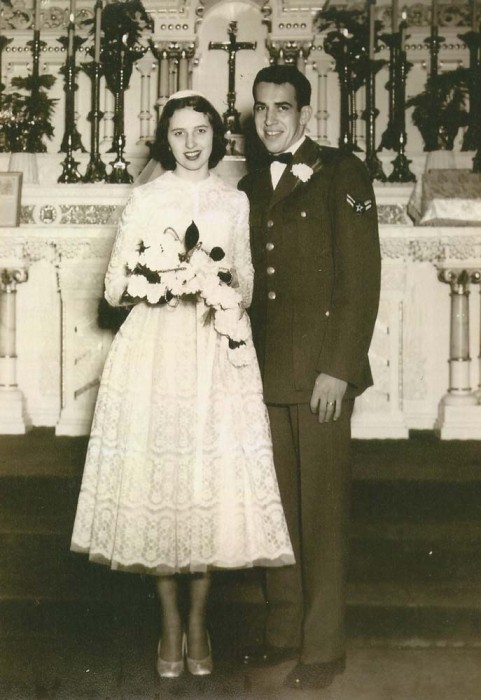 A Family is Born

In hot, dusty Ephrata, Washington, Mom gave birth to my sister, Joie and then my sister, Ruthie. They liked to tell us that Joie’s hospital bill was $7 and Ruthie’s birth cost $4 — so Ruthie was on sale. When our father was done with his service, they moved back to La‌Crosse. Mom gave birth to two more girls, Laurie and Mary. Finally, Mom gave birth to a boy, and the family was complete. 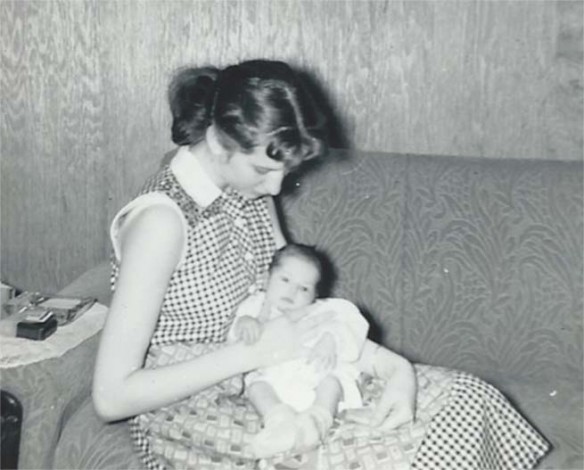 Our family life was characterized by togetherness. We didn’t have a lot of money, so togetherness was our only option. We piled on the couch to watch movies on T.V. We went on camping trips to Goose Island or Hatfield, Wisconsin. Sundays meant crowding in the T.V. room for a Packer game. And when the ref made a bad call, Mom was as loud as any man in the room as she registered her complaint.

When mom and dad threw a birthday party for one of us kids, there were no themes or party favors. Mom made spaghetti or goulash and had cake and ice cream. The guest list consisted of me and my sisters, my grandmother and whichever kid we were hanging out with that day. Now, that was a party. My family carries on the same tradition — on birthdays, we have cake and ice cream and Mom and Dad come over. 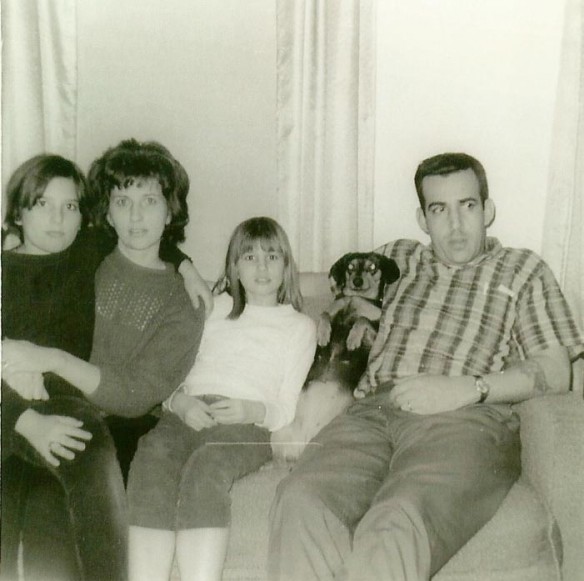 When we were growing up, Mom and Dad showed us that God was important to them. They took us to church every Sunday. Are any of you old enough to remember Saint Wenceslaus church? Our family attended St. Wence, then later The Cathedral. Even later, Mom and Dad attended right here at Holy Trinity. We kids are thankful for our Christian upbringing and we teach our kids about our faith too.

Mom was our dad’s straight man. She would often encourage Dad to tell stories about the funny things they had done together. Then she would laugh and laugh at his stories. Mom was Dad’s biggest fan.

I remember one night staying up late working on homework for an art class. Mom had to get up early the next morning to work at the bank, but she stayed up past midnight with me applying paper maché to some silly sculpture I was working on.

Later, I took up bike racing. I think My parents came to every bike race I did. I remember them cheering for me all over the race course. I have VHS tapes of me racing. But they only show half of me, because while Mom was filming me with a huge VHS camera, she was watching me with the other eye and yelling at me to go faster. 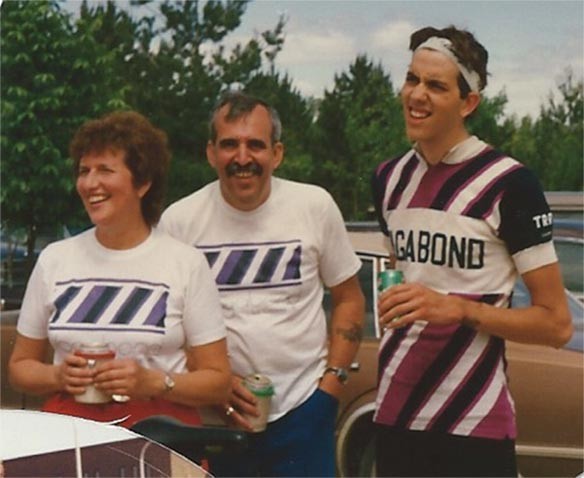 My supportive mother at a bike race. Are not my parents beautiful, especially in contrast to their strange looking son?

When Mom and Dad got rid of all us kids, they realized their lifelong dream of retiring in the south. Mom and dad would live the winter months in Brownsville, Texas and the summer months in La Crosse. During the winter, I would call Mom (not often enough) and she would regale me with stories of her and Dad’s social exploits. They were always going out to lunch with another couple, or visiting a museum, or going to an air force base, or touring into Mexico. They often went to South Padre Island and sat on the beach in good weather and bad. (I’ve seen photos of them sitting in lawn chairs on the beach bundled up in hooded sweatshirts.) 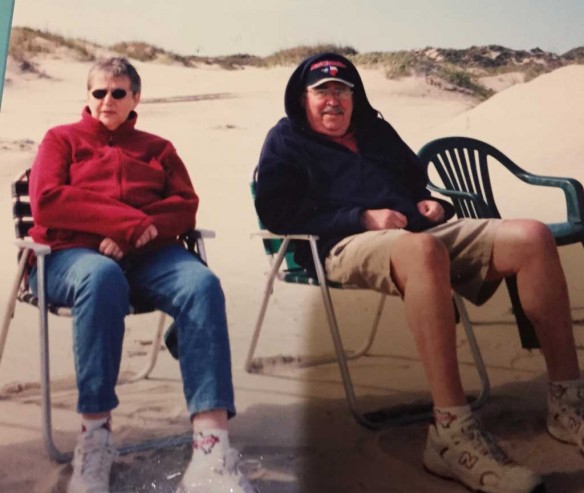 Mary and Ed on the beach on South Padre Island. Dad looks like a tourist. Mom looks like a secret agent scanning the surf for smugglers.

They liked to try different Catholic churches and would even attend services in Spanish, though neither of them spoke Spanish. (I remember my mother telling me once “We went to a restaurant called Casa Blānca.” I told her, “Mom, you gotta call it Casa Blanca when you are that close to Mexico.”)

When my sister Laurie and I took up country western line dancing, my mother was right there with us at the dances. I remember practicing dances with Mom and Laurie in Mom and Dad’s basement. After retirement, Mom began teaching line dancing to other retirees at their trailer park in Texas. And my Dad would dance too, so the little old ladies could follow his steps. 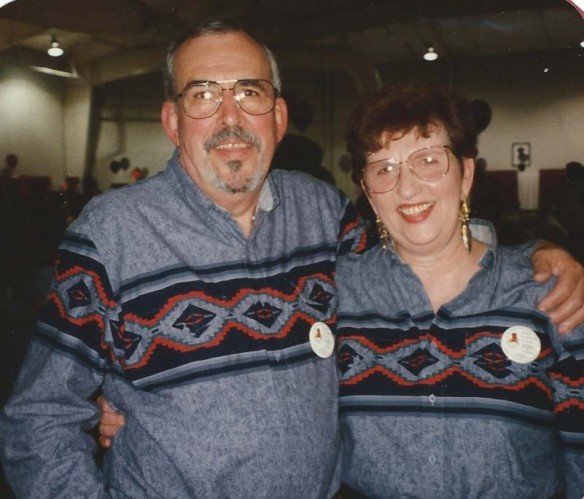 The most dedicated line dancing couples would buy matching shirts.

When Dad lost his hearing, Mom became his ears. And somehow she was also his interpreter. I could ask Dad something and he might look at me quizzically, not sure of what I said. Then Mom, without raising her voice, would repeat what I said, and Dad would catch every word and respond to the question. I guess after 60 years together, his ears were trained to hear her voice. 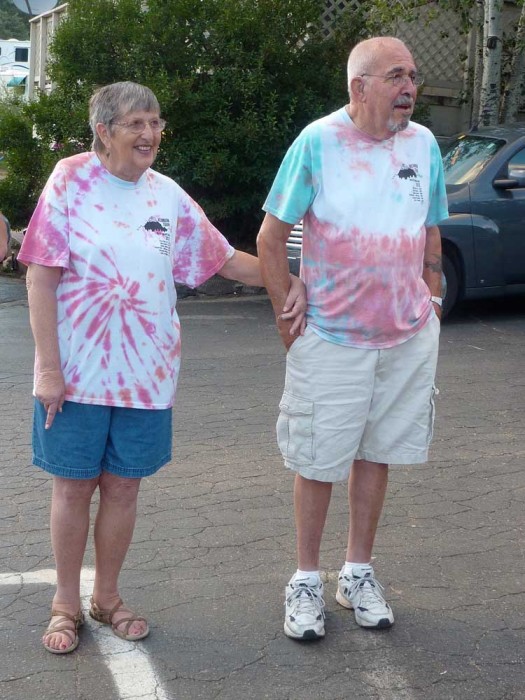 Later, Mom always had hold of Dad’s arm to keep steady. He could not hear well and she could not walk well.

Mom and Dad were almost inseparable, especially after their kids were out of the house. They did everything together, from checking the post office box to going to the laundromat. Toward the end of her life, my mom’s body became unsteady. Then my parents were not just together, but they were hand-in-hand. It reminded me of how, when we were little kids, Mom and Dad would hug in the kitchen when Dad came home from work. I remember that consistent, reassuring image of Mom and Dad embracing — telling us kids that some things were solid and unchanging. 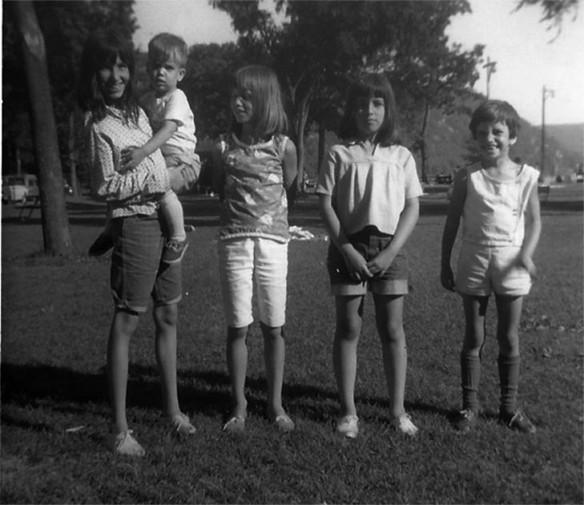 Thank you, Mom, for being a supportive, loving, steady part of our lives. From all of us kids, we love you.

Except For Two More Pictures 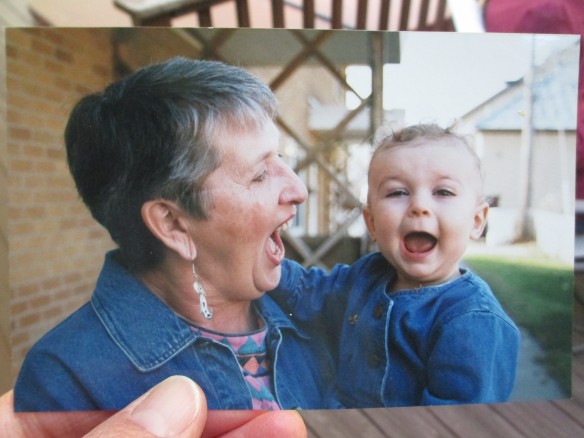 My mother with my first daughter, Helen. That’s a cool grandma! 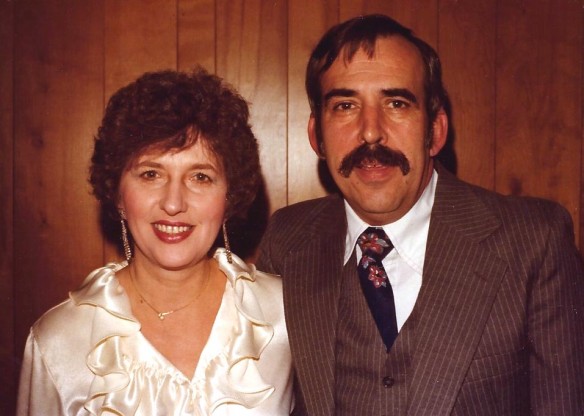 I love how young and happy my mother looks in this photo (and that ‘stache on my dad is deserving of awe too.) 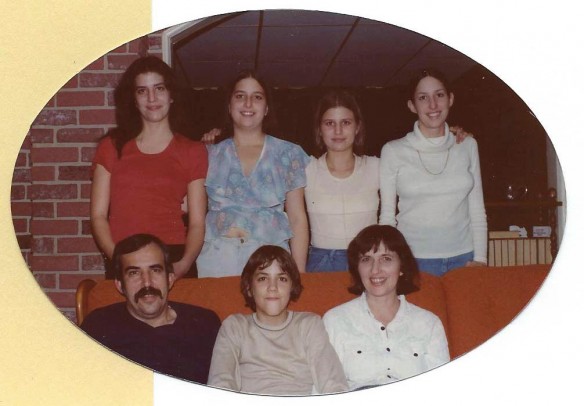 My mother looking very cute in spite of the efforts of my four older sisters to drive her crazy. 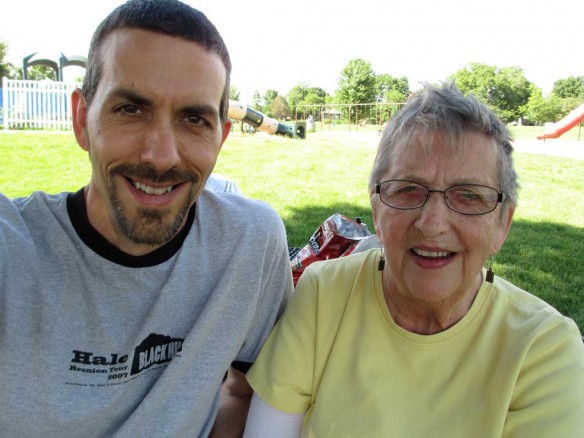